On my last round of over 300 booths in a Columbus antique mall, I saw a checkerboard table that looked vaguely familiar. It was stripped but not finished. Not pretty. Price: $45. I had already spent my budget for the junking trip, I was exhausted, and my friend was waiting for me, so we loaded our purchases into the car and started down the road.  After a few miles it sunk in: that table had to be THE table!

Nearly 40 years ago, I took an old checkerboard table to a re-finishing store in Columbus to be stripped, repaired, and finished. After a year and many calls, I went to the store to check on the table. The owner said he hadn’t finished the project because the repair on the inlaid blocks was so difficult. A year later, I went back to the store; this time I saw the stripped table and was very disappointed. He assured me that it would look better when he finished the repairs. After another year of not hearing from the re-finisher, I went to the store to see what was going on. He told me that I had not complied with our agreement to pick up the table in a timely manner, and he had to sell it to get his money. I was furious. But the table was gone. I just walked away, sobbing. Occasionally, through the years, that table would haunt me. Several days prior to the visit to the antique mall, I had thought once again about how I lost that family possession and how I could have kept it.

The missing table, a library table, and a set of bookends were given to Aunt Alma by a skilled woodworker who wanted to marry her. But she was destined to be an old maid; her father decided that this man wasn’t good enough for his daughter. These three items were in the old family house when we moved in. Although the other pieces were stained, the checkerboard table was painted white, with the inlaid checker squares painted black and white. My husband remembered using the table to play checkers with Aunt Alma when he was a child, and my sons Tom and Ben used it frequently when they were kids.

So I turned around, drove back to the antique mall, and bought the table.

When Tom took it out of the van, without prompting he immediately exclaimed that it was Aunt Alma's table, pointing out some broken squares that he remembered. Then he recalled a broken part of the leg that had been glued. After he described the break, we examined the leg and saw where it had been glued together. Oh, my goodness. That's the only time I have ever seen him get excited about a piece of furniture!  The next day, as I was cleaning the table, I checked the supporting curves on its leg and compared the design with the curves on the library table. The pattern of the curves is exactly the same. And there are other similarities in the techniques. It's ridiculous how happy this homecoming made me! (One day, I will get around to sanding and staining it.) And Tom pointed out how much money I had saved; surely the re-finishing guy would have charged me much more than $45 for stripping, repairing, and re-finishing the table! 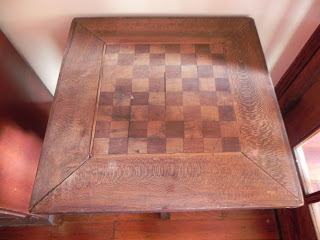 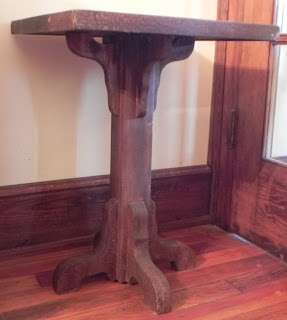 Posted by Mary Starke at 9:14 AM No comments: