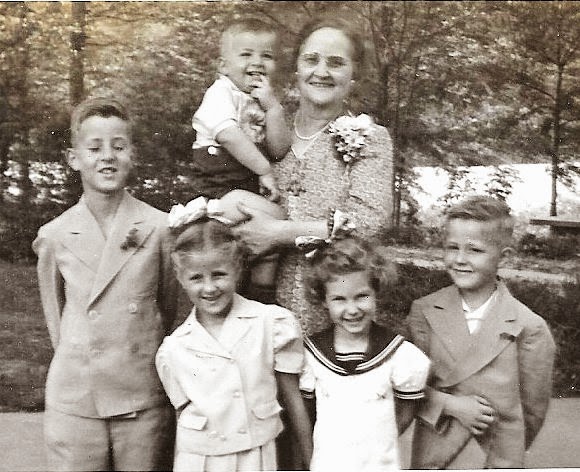 It’s appropriate that this post is a day late because I don’t have any siblings! But I am lucky to have had ten wonderful cousins: four on my mother’s side in one Alabama family, and six on my father’s, three in Alabama and three in South Carolina.  My maternal grandmother lived in my second home across the street from my four Oneonta cousins so the five of us grew up together, and I thought of them as mine before I ever heard the word siblings and realized I didn't have any. During my growing-up years, I spent nearly every Thanksgiving, Christmas, Easter, and Mother’s Day with them, plus weeks in the summer.

This picture was taken on Mother’s Day.  Although I don’t know the year because there is no notation on the back (Oh, Mama, why didn’t you? Maybe the same reason I didn’t either?) I know it was Mother’s Day. I look at the flowers and remember our annual ritual of cutting white and red roses in Grandmother’s garden, making a white corsage for her, and pinning red roses on each other.

When I was about ten, the five of us stood in a circle, held hands, and solemnly promised each other that we would never, under any circumstances, become teachers.  Why was such a commitment necessary? We were supersaturated with school things.  Both of my parents and my aunt were teachers.  My grandmother was the principal of the elementary school, and my grandfather was the superintendent of education for Blount County.  Of the five of us, three became teachers!

Although I was greatly influenced by my cousins, we departed ways when it came to college loyalty. As the child of an Auburn staff member, I of course yelled War Eagle, while the others screamed Roll Tide. (The youngest cousin, however, wound up at Georgia Tech with a PhD in something way out there, like nuclear physics.)


I look at this picture with sadness because these four cousins are all gone now but also with happiness because I still enjoy the great memories of our time together.

Posted by Mary Starke at 9:42 AM No comments: