I am in a nostalgic mood today. I’m dealing with grief, but I’m smiling because I have such good memories of being neighbors and friends with Marvin and Carolyn Vickers.

A little historical background: Before the parsonage for the Seale United Methodist Church was built on McBride Street, the parsonage used to be on what is now called Oswichee Street, my street. My father-in-law had given the property to the church with the provision that it should always be owned by the church. To sell that land in order to build the new parsonage, the church asked my husband, his sister, his three brothers, and all the spouses to sign away our possible claims—something we gladly did.

When we moved to Seale in 1963, Marvin and Carolyn were our neighbors. Warren’s family had already claimed the Vickers as family members, and we soon learned why. They were special. We loved them and they loved us back. Carolyn and my sister-in-law were very close friends and have remained so. Once you were friends with them, you were friends for life. Marvin was a student at Emory’s Candler Seminary in Atlanta during the weekdays and came to Seale on the weekends. Carolyn taught in the elementary school in Seale and lived in the parsonage. My son Tom was a toddler then and was quickly adopted by Marvin and Carolyn. When Sears delivered a large gym set in several boxes to our back yard, Marvin recruited a friend and they worked all day--under Tom’s supervision--to assemble an assortment of swings and a slide. Tom always called Marvin “Uncle Peacher.”

A couple of years later, on a Tuesday night, Carolyn and I were cleaning up the kitchen after a fresh vegetable supper. Warren and Tom were outside. I suddenly started having violent contractions—a few weeks early. Panicked, I turned to her and asked, “What should I do?” Without missing a beat, Carolyn exclaimed, “Doan look at me! Lawdy. I doan know nuthin’ bout birthin’ no babies!” After we stopped laughing, she made sure I got organized for a trip to Columbus, where Ben was born three hours later. After Marvin baptized Ben, he and Carolyn were part of our family celebration at Villula Tea Garden. 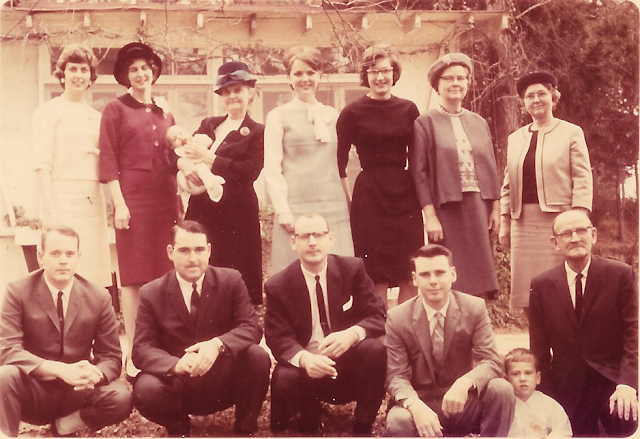 We have kept in touch over the years, through distance and time, through children and grandchildren and motorcycles and Korea and Blue Lake. They visited me a couple of years ago, and on June 10, 2017, they attended our church’s 175th Anniversary.

We lost Carolyn last night. Yes, today I have tears, but I also have a smile. Thank you, Lord, for good friends.
Posted by Mary Starke at 9:59 AM