Backstory of the Idiom

A snipe is a slender-billed bird of the sandpiper family. Its coloring makes it well-camouflaged in marshy areas. A snipe is so difficult to catch or shoot that sniper refers to someone skilled enough to shoot one.

In a snipe hunt, experienced people make fun of gullible newcomers by giving them an impossible task. A snipe hunt usually takes place within a specific work environment or social group; the task is part of a tradition, similar to hazing.

The phrase snipe hunt originates from a practical joke within a camping context. Inexperienced campers are encouraged (rewards or threats) to catch a snipe, which moves around in the dark from tree to tree. A snipe can be a bird or an animal, depending on who explains the rules. The dupes are given sacks and told the ways to attract a snipe, such as banging rocks together or whistling a specific way, while the other hunters push the snipe toward them. Of course, after getting the greenhorns lost in the woods, the old-timers just go back to the campfire and wait to see how long it takes the newbies to give up and show up.

Meaning of snipe hunt: a futile search or endeavor

I have personal ownership of this idiom. When I moved to a new Girl Scout troop in the sixth grade, the five greenhorns in the group were included in the invitation to a weekend camping trip at a farm in Gold Hill, just outside Auburn. With brand-new sleeping bags on our shoulders, we emerged from family cars feeling both adventurous and apprehensive. None of us had ever slept outside. Overnight. In the dark. But soon we were having fun cooking over a large campfire, with the help of our leader, her husband, and her son. We sang songs and told stories and learned about constellations and petted the two farm dogs.

Then the husband announced that we were going on a snipe hunt. The older girls cheered and talked about how much fun we were going to have. But this time, the new girls would have the most fun because we could catch a snipe, a harmless small animal that traveled in small packs from tree to tree, only in the dark. The son told us that snipes are attracted by a certain kind of noise, something like whistling. When a snipe hears the right sound, it stops to listen. Each of us was given a feed sack, and the older girls demonstrated how to whistle up a snipe. Our leader announced that the girl who caught the snipe would get a great prize, but we were encouraged to help each other. Because that’s what good Girl Scouts do. And the older girls generously said they would try to drive the snipes toward us.

Off we went, away from the fire and the cleared area, into the woods, led by the lanterns of the husband and the son and the barking of the dogs. Somehow, the lanterns disappeared, and we couldn’t hear the dogs. In the increasing darkness of the woods we suddenly noticed that only the five rookies were left. We giggled with semi-fear and tried to tell jokes to keep from freaking out. We walked for what was surely nine or ten hours, whistling. Not for a snipe. Bagging a snipe wasn’t on our minds. I don’t remember how we managed to get back to the campfire, but we were too tired to enjoy the laughter that greeted us. I had no problem sleeping on the ground that night. And I had learned what a snipe isn’t. 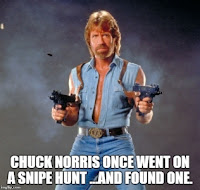